The following writeup describes a vulnerability that allows remote code execution on the Istio control plane. However, this vulnerability requires high privilege access to the Kubernetes cluster in which Istio is deployed. This would normally be a low / informational risk vulnerability, but in a managed Istio context, it becomes higher risk. To demonstrate, I focused on the Google-managed Anthos Service Mesh (ASM), which runs the Istio control plane in a Google-managed project using a per-product per-project service account (P4SA) that authenticates to the user’s GKE cluster. The end result of this vulnerability grants remote code execution in the managed ASM control plane.

Istio supports several deployment modes, including multicluster deployments. In a two cluster installation, cluster administrators provision the Istio control plane in each cluster with access to the other cluster by creating a Kubernetes secret in the istio-system namespace with credentials in the form of a kubeconfig.

By combining these features, it is possible to execute arbitrary commands in the Istio control plane using the following steps:

Even though managed ASM runs outside the cluster, it still monitors the cluster for these secrets and executes the credential plugin if present.

A sample kubeconfig with the exec plugin is shown below:

The public Istiod container image on Docker Hub has many helpful utilities to assist an attacker. For example, docker.io/istio/pilot:1.11.3 includes /bin/bash and /usr/bin/nc which can be easily used to construct a reverse shell to an attacker-controlled system.

With just openssl to work with, it’s quite difficult, but not impossible to gain full control of the container. I spent nearly a full day working on this problem, and I’d be curious to hear about other solutions. The path I took uses openssl’s support for dynamic code execution with the -engine flag. The engine loader will load a shared object from disk using dlopen, so we simply need a method to write an arbitrary file to disk.

Unfortunately, I could not find an openssl subcommand equivalent of curl to support downloading data from a remote server. s_client is very promising of course, but doesn’t provide a means to write to disk. After reviewing each of the supported subcommands, I settled on using the req subcommand to write a DER encoded certificate to disk. Within this certificate, there are several fields controlled by command-line arguments, although most have limitations on length or character sets. However, the -set_serial accepts an integer of arbitrary size and includes this within the certificate. The layout of the DER encoded certificate is almost perfect, with our big endian-encoded integer appearing in the output file after 16-ish bytes of DER headers. Since ELF files can contain trailing bytes, the remainder of the certificate is irrelevant.

This would be perfect except for the first few bytes, which are not a valid ELF header. To deal with these bytes, I decided to treat the header and encoded integer as ciphertext, and choose an IV and integer such that the resulting plaintext would be my desired shared object. Then I used the enc subcommand to “decrypt” the certificate and write the result to a file.

I’ve automated all of the above steps into a script that produces three Kubernetes YAML files for the following general commands:

My openssl engine, the exploit script, and output YAML files can be found here.

To customize the shared object, edit exploit.c and change the callback server. Then rebuild with ./build.sh and regenerate the YAML files with python3 cipher.py. This will produce YAML files for the kubeconfig and secrets needed to execute the attack. If you’d like, you can examine the kubeconfigs to understand the commands that will be executed. You can then deploy the secrets using the following: 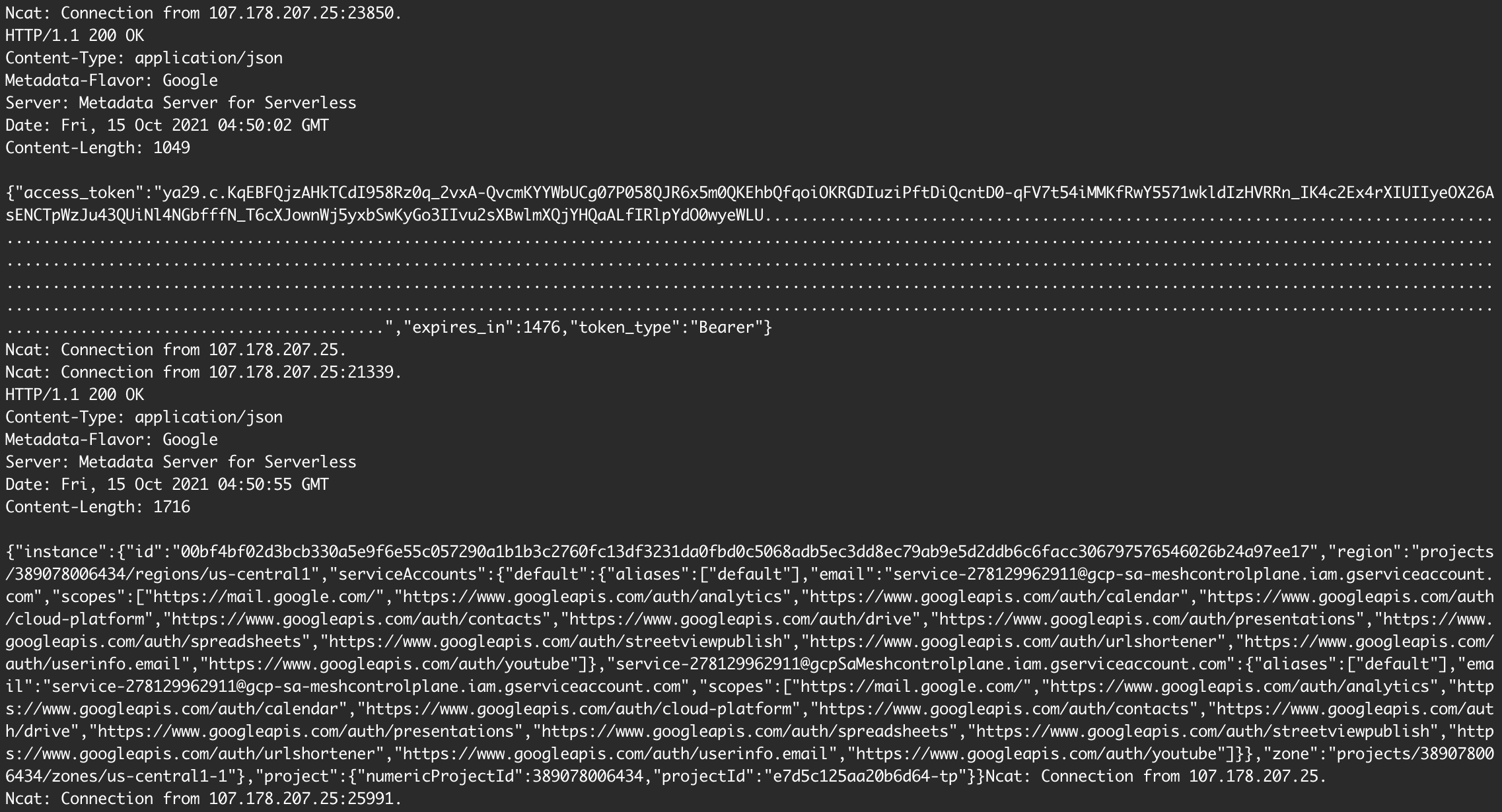 As shown above, I accessed the metadata service for the serverless workload running my ASM control plane in the e7d5c125aa20b6d64-tp project. I also obtained a token for the [email protected].com P4SA.

To exploit this issue, an attacker must create a GKE cluster and deploy managed ASM in their project. After deploying three Kubernetes secrets to their cluster, they gain remote code execution in the managed ASM control plane instance for their project. This instance appears to be running in Cloud Run in a Google-managed project, with the P4SA service-<project-number>@gcp-sa-meshcontrolplane.iam.gserviceaccount.com.

I stopped research once I realized that the control plane ran in a Google-managed project with a P4SA.

On November 30th, John Howard opened Istio PR #36307. According to the release notes, this PR “[removes] support for a number of nonstandard kubeconfig authentication methods when using multicluster secret”. The PR add supports for the PILOT_INSECURE_MULTICLUSTER_KUBECONFIG_OPTIONS environment variable, which can be set to a comma separated list of kubeconfig authentication providers to allow. This configuration option was released in Istio version 1.12.1. In 1.12.1, the default value for this environment variable is:

However, users can set the environment variable to an empty string to block all authentication providers except OIDC.